Books are displayed under a sign at the Harvard Book Store, Thursday, March 9, 2017, in Cambridge, Mass. Readers have been flocking to cl...

Save the light reading for later. In 2017, dystopian fiction is all the rage.

Gloomy classics depicting societies gone terribly wrong have shot to the top of best-seller lists like Amazon’s in recent months, including George Orwell’s “1984” and Margaret Atwood’s “The Handmaid’s Tale,” prompting publishers to ramp up production decades after the books were first released. Others have followed close behind, such as Aldous Huxley’s “Brave New World,” Sinclair Lewis’ “It Can’t Happen Here” and Ray Bradbury’s “Fahrenheit 451.”

Some nonfiction works in the same vein have seen similar resurgences, including Hannah Arendt’s 1951 “Origins of Totalitarianism.”

Much of the renewed interest has followed the November election of President Donald Trump, which publishers and scholars say is no coincidence.

“Definitely the election had an effect,” said LuAnn Walther,” editorial director of the paperback division at Knopf. “There’s fear out there about what is going to happen, and I think these predictive books are helpful to people who are looking for the dangers the future might hold.”

One edition of “1984” has seen sales jump by 10,000 percent since January, when Trump adviser Kellyanne Conway defended incorrect claims as “alternative facts” in a TV interview. It instantly drew comparisons to the type of government manipulation Orwell wrote about nearly 70 years ago.

“That was so perfectly Orwellian, that truth is variable and can be changed, and that there’s a fact and then there’s a counter-fact,” said Peter Stansky, an Orwell biographer and a professor emeritus of history at Stanford University. “The current Trump situation has just caused a vast upsurge in interest.”

Other critics have said Trump’s views on immigration and the news media, while not unique, would fit neatly into the plot of a dystopian tale. In college classes on dystopian works, students have been eager to draw their own parallels. Dozens of U.S. movie theaters are screening a film version of “1984” in April as a protest against many of Trump’s policies.

“Orwell’s portrait of a government that manufactures their own facts, demands total obedience and demonizes foreign enemies has never been timelier,” the group United State of Cinema, which is organizing the protest, wrote in a statement.

Those types of barbs are far from new in American politics. Critics of former President Barack Obama compared him to the watchful Big Brother in “1984” after a vast government surveillance program was detailed in 2013 leaks. Sales of the novel surged then, too.

In the case of Trump, some scholars say the comparisons are largely unjustified.

“On the face of it, there are absolutely no parallels,” said Robert Colls, a professor of cultural history at Britain’s De Montfort University who wrote a 2013 book on Orwell. “Trump was elected, and as far as I know he hasn’t purged anyone or killed anyone.”

Quentin Kopp, a leader of the nonprofit Orwell Society, said that there may be some similarities but that “it’s easy to overstate these parallels or dig too hard.” His group seeks to promote Orwell’s life and works but takes no political stance.

Some experts say readers often return to dystopian works during periods of great change, hoping to find out how they can avoid the nightmarish worlds the works depict. Beyond the U.S. election, readers might be jarred by events like the global refugee crisis, some say.

“There’s a factor of activism that you can take away from reading dystopian fiction, reading it as a defense against who we might become,” said Therese Cox, a doctoral candidate teaching a course on dystopian fiction at Columbia University. “It speaks to impulses and fears that we’ve had for a very long time.”

Others say new adaptations of classic works have fueled renewed interest. Hulu is releasing a TV version of “The Handmaid’s Tale” in April, telling the story of a woman in New England after an oppressive religious regime takes over. In June, a British stage production of “1984″ is headed to Broadway.

John Morillo, who teaches a course on dystopias at North Carolina State University, said readers have long enjoyed dystopian fiction because it lets them experience the thrill of something horrific without the threat of real danger. But now he sees another benefit — it can offer readers a comforting reminder about the world today.

“Now maybe it’s a sense that, well, it’s still not that bad,” he said. “They can close this book and say, ‘Now there’s hope for the future.’” 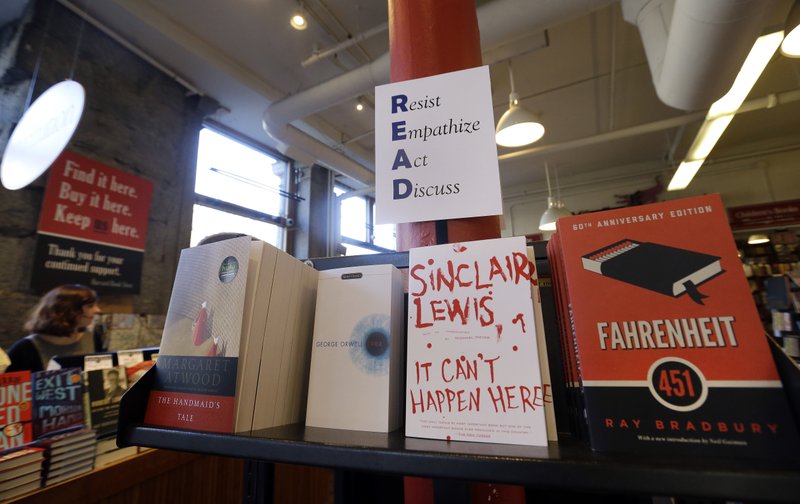